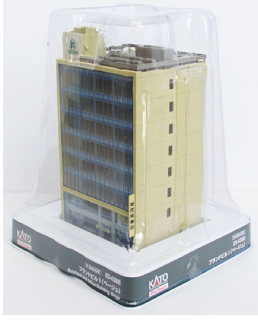 While I like the overall look of the KATO building I purchased, I wanted to add something to it to make it different than the thousands of them that are out in the world right now. So, a kitbash was in order. :)

My plan was rather simple. I got a TOMIX corner stores pack and thought that it would fit nicely right on top of the KATO building. It was a bit of a crossed finger situation - I wasn't sure that the corner store would fit on top. I was lucky in this case, it fit perfectly.

With all the windows in the corner store structure, I really needed to do something with the inside. There are various little details on the rooftop of the Kato building (another cool thing about the Katos) so I used them as inside details for the corner building. It worked out well. I was able to add printed details to them and it fit well. 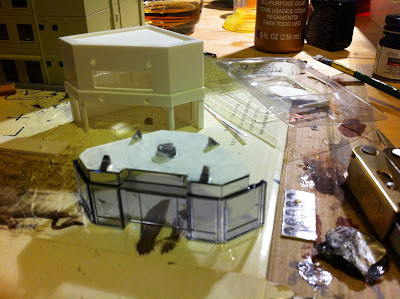 The addition of the people and printed details was huge. The windows of the corner store are so large that you really need to add things to the inside or it just looks like a big, empty shell. You get two corner buildings in the Tomix pack, so I'll have to detail out the second building in the same way. 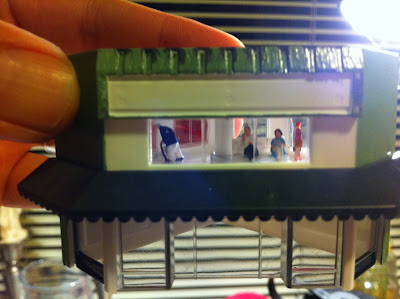 The first round of external painting. I'm trying to sort out what will go above the top window. I think I might use some styrene with the square pattern grid on it on the large square space of the rooftop, then paint the blocks to make an interesting design. I think that will finish the front nicely. 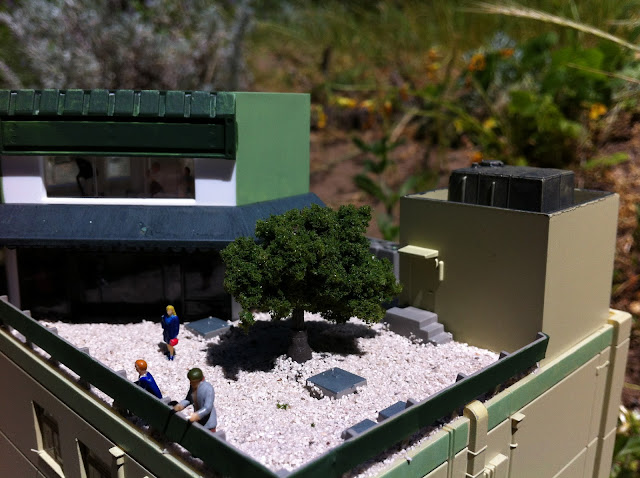 I need to go back in and clean up some of the rush job I did on the roof. I was dashing to get it done before bedtime, so it's a bit wonky in some places.   It does look like a lovely spot to get some Shizuka photos from up high. :)

I've also added some additional printed "poster" signage to the building walls as well. It seems like quite the thing in Japan. With the exception of the Blade Runner poster, they are real ads from Japan. 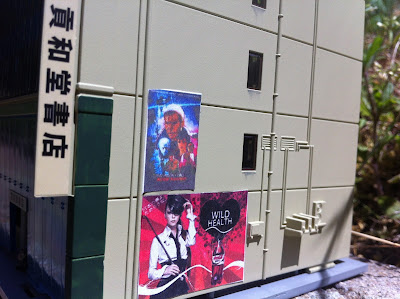 There is an issue with doing hobby time the way I've been doing it of late. I'm trying to fit in time to do this work, but the way I have to wedge it into my life at the moment makes for some sloppy work. heheheh  I try to pace myself and make an effort to get things done cleanly, but I'm also trying to complete small projects in one session. I hope to have a little more breathing room in a few months along with an actual area to set up projects and actually leave them out to work on them over a few evenings.

Cheers!
Posted by malcoJOJO at 9:31 AM 6 comments:

As I spoke to in a previous post, I purchased the Kato 23-438B N scale building and a Tomix 4015 Corner Shop Buildings and my fingers were crossed that the corner shops would fit on top of the Kato building. I was pleased when it did, seeing as that was the cornerstone of my whole idea for the roof area. I tackled the rooftop first (write up to follow) and then moved on to the interiors.

I was slightly shocked that the floors were all loose and held in place by the walls and a center light bar shaft through the center. Pretty smart, but messy once you have it opened up. 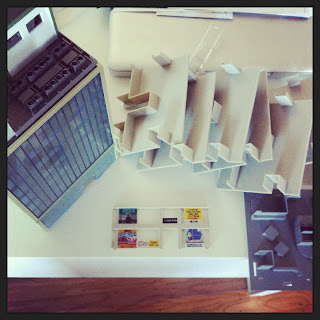 I held the pieces together and numbered the floors in case they needed to go back in the same way they came out. I'm actually not looking forward to putting them back in post-build. 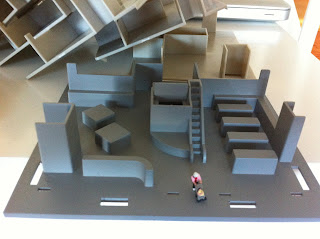 The lobby area itself is built with lots of potential action, which is grand.

You can see that there are several platforms, walls, an elevator shaft that all the way up the left side inside (THANK you, KATO! I have several buildings with no elevator or stairs and it bugs me! :) ) and a few other elements you can play off of. My first round of laying stuff into the scene was pretty simple, but I might add a bit more...even though it's hard to see without lighting. (SEE: Need to learn about building illumination, dang it) 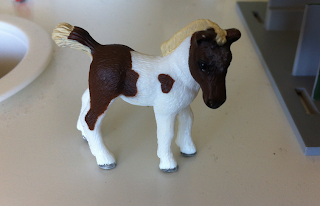 I wanted a center statue for the lobby. Something large and grand. Something tourists would visit the building to see. I went to the local toy store and picked up this little plastic horse. It fit height and length wise and was something grand - or, at least it would be after a few layers of paint.

I went in on it with a layer of lack, then a few greys to try to make it look like stone. A dull coat will be applied later. 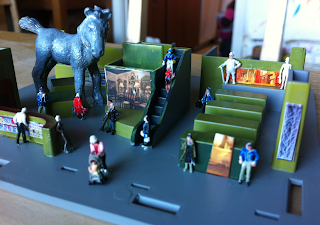 I used some of my "B Team" Preiser N scale people that I painted up for the interior. The paint-up wasn't horrid on the figures and it totally works for a less expensive, internal people scene addition. I used some unpainted Preiser's to be showroom dummies (on right) and used my sheets of random scaled art and books to give the inside some additional depth.

So easy at this scale. I just printed up several sheets of books, bookstore shelves, antique shops and the like after doing a few Google searches. Once downed, I placed them all on sheets in Photoshop as to what they were - a sheet of books, interiors, exteriors, etc. with some on photo paper and some on plain letter paper. Now when I need something like this lobby filled, I just go to the printed sheets. Most of these interiors can't be seen very well, but the depth and the internal variance really helps the scene.

As you can see from the image below, the interior details add just enough here to make it look like there is life in the building. Things going on. Action. I love doing this with these otherwise hollow and empty looking structures. The Kato building comes with window signage on a plastic frame that slips into the floor with simple tabs. Pretty handy. Some of these signs may be replaced in the future with images of other areas of the Shizuka layout or Soyokaze and the fishing area there. :)

If you want to see someone doing this dialed up to 11, check out  Quinntopia over at    http://www.quinntopia.com/ ! Amazing stuff. The internal items with lighting are really something I'm aiming for in the Bright and Glorious Future® ! :) 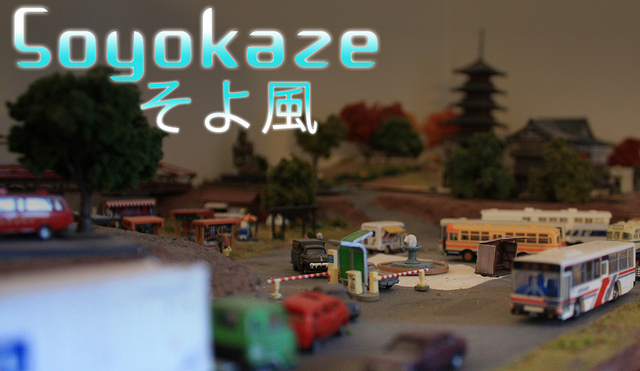 In 2013, Soyokaze will be going through some major changes...I hope.

We are looking at home options and our current selection has a space for an office / layout room for me. Needless to say, I'm thrilled with the idea. This will not be a "basement empire", but it will be four times the space I'm currently using here at home. This will allow for me to finally take the Soyokaze and Shizuka sections and putting them together with rail transport between the two.

Soyokaze will stay the same while I work out the benchwork, etc. , but it may be stripped and reset after that allowing for me to restructure certain elements and enlarge other areas like the water and pond spots. 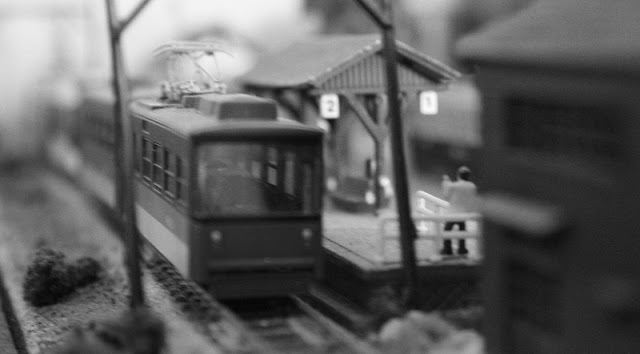 Soyokaze station will remain quaint and small, but there will be an addition of a subway section if I can work out the benchwork to support it. I want a trolly to service Soyokaze on above ground tracks to keep a smaller, more quiet feel to the area. A more modern, Japanese train will service the area underground. I need to work out the tracks going under the village to see if I can get the grade right in the space I have to work with. Basically, six inches over about five feet. We'll see - I've never done anything like that before. :)

Scenes and interactions will still play a major part in my setup. I love having little areas where people are living their tiny lives out on my layout. While things are being set up, I plan on doing some more writing based on current scenes like the one above - telling the story of the little scene and what's going on there. It was fun doing the first one and I'd like to continue. 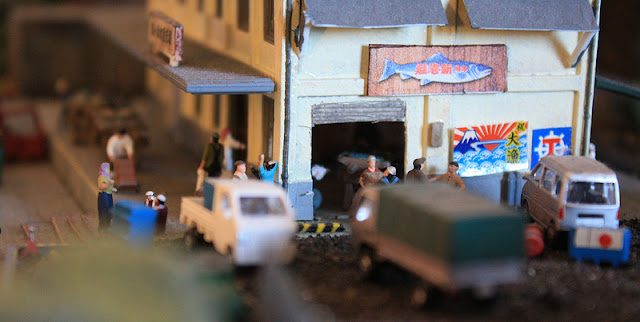 I'm also planning to continue the fishing industry carry through with a Soyokaze branded fishing presence in Soyokaze and Shizuka. I'm even planning a little spur out to the fishing spot for train delivery service.

While exciting, I also know that 1.) The house deal my not pan out this round and 2.) even if it does work out, it will take me a long while to set up the benchwork, trackage and the like. The time and money that will be needed will make it a slow process.  At least things are moving forward on a few fronts. 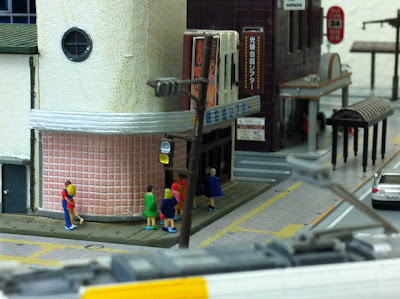 Shizuka residents were awakened this morning at 8:39am by a minor earthquake. The 3.5 quake ruffled feathers and broke some windows, but nothing more was reported. Morning traffic returned to normal in the later hours of the morning.

"It was shocking to feel the earth move like that while drinking my coffee," said one Shizuka resident. "I didn't need me coffee after that!"

Minor aftershocks were reported in the hours after the main quake hit, but residents didn't seem too shaken by the morning's events.

"We had planned a trip to Soyokaze later tonight and we're still going. This quake won't separate us from our delicious fish dinner!"


:::::  I walked into my office this morning to find bits of my layout on the floor and shifted and shoved. I think someone hit the table it's siting on while vacuuming the office. The "layout" as it stand now is just a Kato Unitrack setup and it's not set at all, so the cleanup was minor, but it did leave me wondering how it happened. :)   :::::
Posted by malcoJOJO at 9:15 PM No comments: