Gutters between street and building

I need to have this "gutter" look between the buildings and the street.

Most likely will not happen on my current layout without a lot of reconfiguring, however I want to build it into the future layout if I tear everything apart and start from scratch.  I think it's a fun feature and would make for an interesting detail.

The hobby bug is hitting me again


Well, the hobby bug is starting to creep in around the edges again. My new baby girl is getting older and our house routine is starting to get a little less manic, so the idea of actually sitting down and getting some hobby time in....somewhere...makes a little more sense. Well, that, a little bit back in taxes and my Mother-In-Law coming for a visit shortly. :)

And, listening to MODEL RAIL RADIO adds to it as well. So much fun hearing about what everyone is doing. (It's a great podcast if you have not already heard it. Check it out!)

Thinking long term, I snagged another KATO building for Shizuka, the city portion of my layout. I'll need a few more of these base buildings for the layout to go along with what I already have. I also have some custom, signature buildings in mind to build from scratch later in the game.

I'm continuing the bus madness with the addition of two little KATO buses. I'm still not sure what I love about buses, but I figure I'll just go with it until things get totally out of hand. :) This actually goes along with the lore of Shizuka and Soyokaze - buses being a great way to get from one to another to avoid having to drive yourself. Eventually, there will be a modern bus terminal in Shizuka and a more quaint and quiet terminal in Soyokaze.

I also snagged some KATO Taxis. I'll have to figure out which ones will live in Soyokaze and which will be in Shizuka. I'm trying to replace all the American motor vehicles that are currently on my layout. I might try a repaint on some of the American Taxis that are on the layout now - making them look more Japanese. Maybe "America Taxi Company" for tourists?

And lastly, more houses for Soyokaze, though I'm not sure where they are going to go. :)  I've looked at some small village towns in Japan and they are rather dense. Rows of tightly spaced buildings. So, I thought about fitting in more buildings in Soyokaze. I just need to play around with where to place them. Again, this is a moot point due to the fact that - in the BRIGHT AND GLORIOUS FUTURE® where we've moved to a larger home - this Soyokaze section may in fact be torn up and re-placed depending on what's going on with it then. So, we'll see!


I also have plans to add steps to many of the foundation areas of the Soyokaze buildings. You can see that the "sidewalk" areas are far too high to be manageable as they stand now. 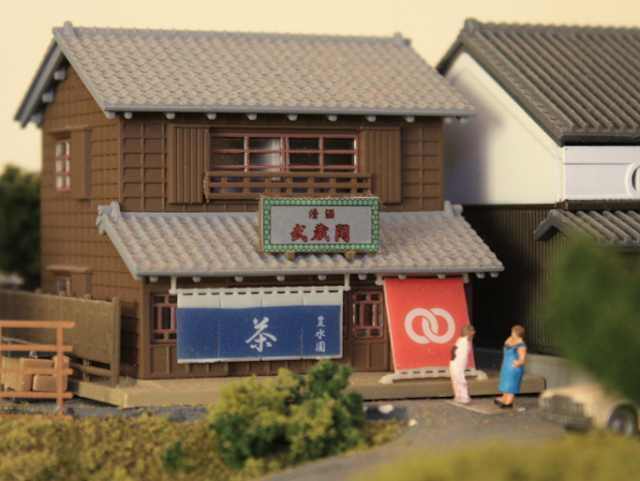 I'm also going to place some gravel in around the foundations to get rid of the gaps there. Makes taking photos a real pain.


Speaking of photos - Curse you, Dust! I can see where having a layout under glass in a table or something would be pretty awesome. Keep the dust off the layout! 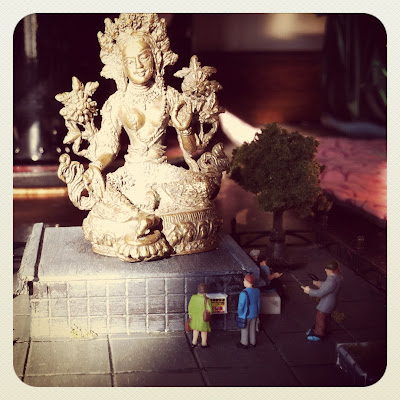 I ran across my photo of my little statue scene and it made me happy. :)
As I've said, I've placed a lot of the model rail related items on the back burner for now due to real life duties around the home. Seeing things like this gives me hope for a bright and shining future in the hobby once the smoke clears.

And, the mere fact that I've taken the time to post this finally gives me hope for side projects related to the hobby - like my little Soyokaze Stories plan where I take images like these and write little tales about them. I have TONS of images to do this with and it will combine my love of writing with the love of layouts and trains.

This little scene was a lot of fun to work out. I had gotten the small, metal figure as a gift. It was sitting here on my desk and I glanced at it, then at my n scale stuff, then back at it and something clicked in my head. It seemed like the perfect centerpiece to an n scale scene. I was super happy with the outcome.

The base is a simple structure built from styrene. I then painted it and weathered it up to look like stone. In "The Bright and Shining Future®" of my hobby time, there will be lots of these little scenes scattered about. That's one of my favorite aspects of the hobby - scene creation. After seeing some Google images of Japan and it's street, town, and city areas, I'll have A LOT to work with when the time comes to start in again on a full layout. I love little detail elements like bike stands, vending machines, parking areas (some as simple as a spot for three cars and a small pay machine) and items of that nature.


Yes, I know this is in Japanese, but he's one of the most amazing model rail artists (yes, artists) I've ever seen. I love his work and thought I'd share. You can tell what he's doing even if you can't speak Japanese. :)
He's the same guy that did the amazing GREENMAX TRAM layout in a small, 13" or so box. ((http://n-rail.blogspot.com/2012/01/greenmax-tram-car-layout.html)) 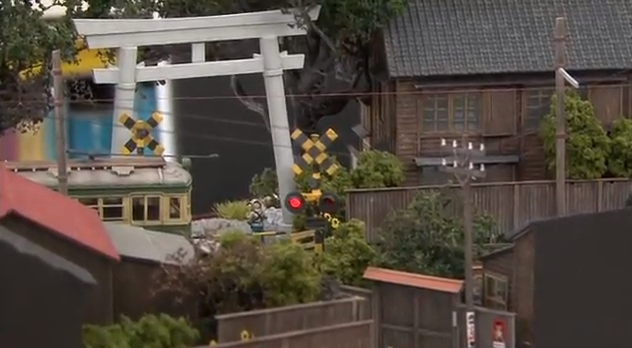 Posted by malcoJOJO at 10:04 PM No comments: