PROGRESS! REV03:v01 is proving to be an improvement 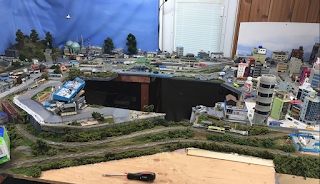 I really enjoyed many elements of the old layout. It hit many of the scenic marks I was talking about years ago on Model Rail Radio when I still had pieces spread between home and my office 45 minutes away. When we moved and I was able to put everything in one spot - something I had talked about for years with dreamy eyes, I moved quickly and started getting everything into place. I was thrilled to have the opportunity to get things moving.

At the time, I wasn't really into the train side of things. I wanted them to roll through and past my scenery, but they were definitely far down on my list of wants. That changed after I was able to run trains around. I suddenly wanted a bit more out of my layout on the train side. I thought through bandaid fixes, but I had already gone through a series of these sorts of quick fixes and thought about scrapping the works and just starting over.

I talked this through with Tom Barbalet on a recent episode of MODEL RAIL RADIO. (roughly the 31 minute mark if interested, though the whole show is fantastic!) Tearing up my layout seemed like madness and folly. heh He really thought that I could manage the process and suggested that it might be a good way to go based on my long term wants.

Now that I've taken a minute to rough in a new version after tearing things apart and boxing things up and I see how much better the overall flow is, I'm VERY happy with what's going on and I'm excited to have something that hits both my love of scenery and scenes and my new found love of trains and a small amount of operations.

OVERVIEW VIDEO (cut off at the end, sadly) 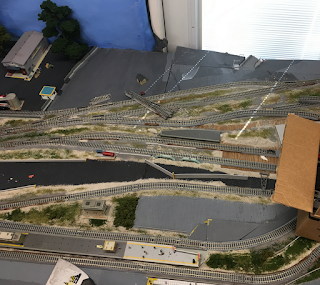 My old yard area was fine and worked well enough. But, there were still things I wanted that I wasn't getting - mainly being able to run freight around in a large loop like I was doing with my high speed rail.


I kept the basic space for the yard the same, but I'm using the same track for both high speed and freight, which now allows me to park trains in spots and run others around on the same track. Lovely.

The factory is in the same spot....
And, post tweak to get the freight area switched back into the main loop again. 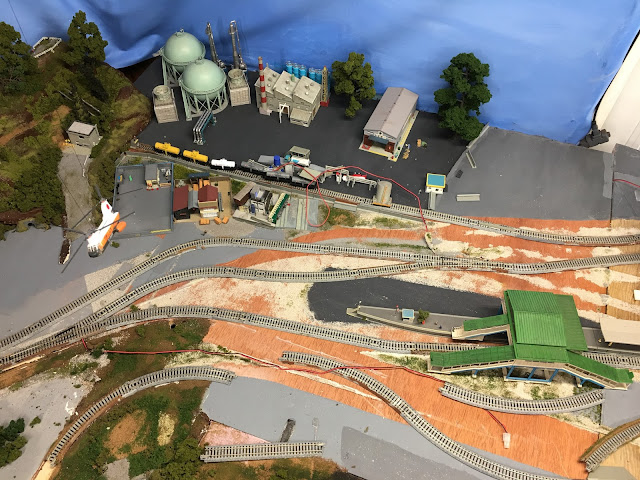 I have a little shipping spur - again, in the same spot as it was previously. And, I've rigged power so I can "park" trains in both areas, allowing for some small switching puzzle fun as desired. 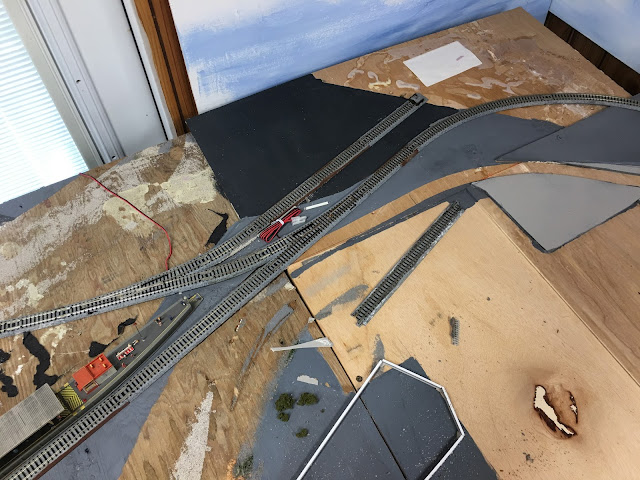 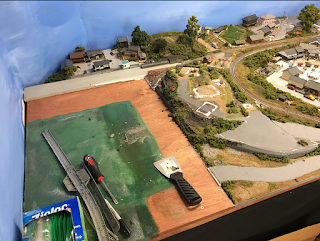 My old harbor area was fine for the most part - probably the most complete of the whole layout. But, I wanted a little more height between the dock and the water. It seemed rather...low. I also wanted to address the full freight loop.

Now I'll be able to run freight out to SOYOKAZE HARBOR (pink area below) on the outside line and run the other trains along the inside. Freight being loaded in the harbor can hang out while other trains pass with ease. The temple area that was between the harbor and Soyokaze village will stay in the same spot, but may be moved up a bit higher so I can increase the overall size of some of the hills and mountains on the layout as well. 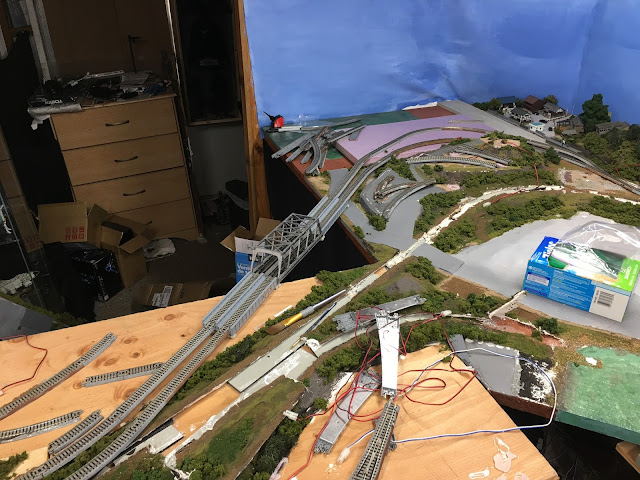 The bridge tracks area in the image above will also be raised up higher, ticking off another WANT - raised tracks in certain areas of the layout, Something like this... 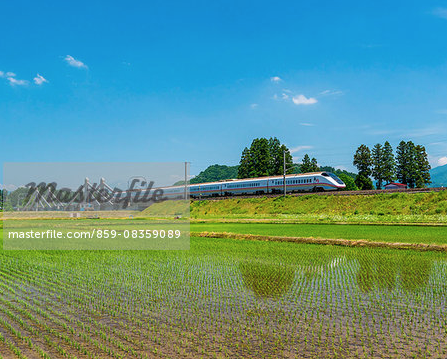 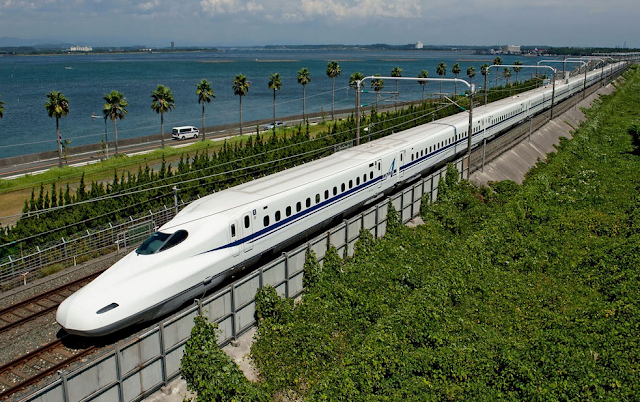 I'm currently looking at RE-RE-RE-RE-planning Shizuka yet again and working out how the tram will run. It's shaping up. I'm planning on having it loop through the older section of Soyokaze, then back to Shizuka and through the KATO Uniplates. I may even attempt some street running as it passes through the Old Town. :::: ticks off yet another want :::::

The big thing now will be finding locations for the buildings I currently have in my possession. :::grin::  This will actually be a good thing, I believe.  I'm going to be able to fill in some of the spots that were used for tracks previously and make more sense of the surrounding area from a city planning and transportation perspective.

What I'm not thrilled about doing to removing the scenery in certain areas. I've already drawn first blood doing so recently! heheheh   It turns out scrapers are sharp on the edges....go figure....   The glue I was using on some of the elements REALLY did the trick - that stuff is stuck and wasn't going ANYWHERE without a fight!

Overall, I'm happy with the progress. I'll actually have some evenings free in the next few weeks to do some major work, so I'm making an effort to get some more planned out between now and then.

Posted by malcoJOJO at 3:51 PM No comments:

REV 03 is starting to move forward! I think I might have an idea that will work well for both my HIGH SPEED and FREIGHT trains! Very exciting. Now....I just need to make sure the power works out. hhhehe

As the video below says, The idea is that the freight will roll through to the harbor area on the far left and the high speed will cut in on the inside. 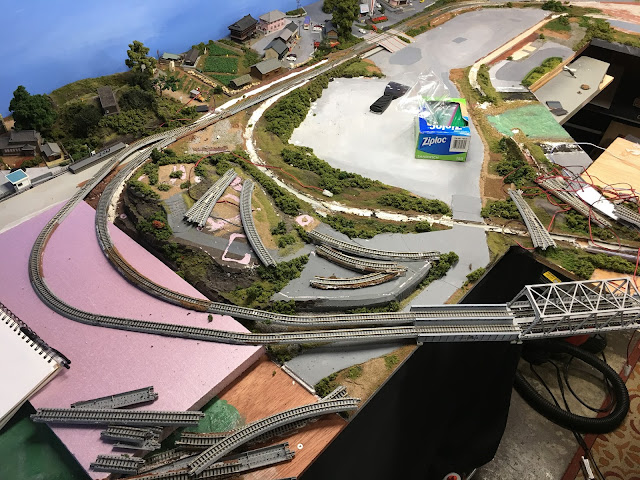 I like the idea of extending this area a bit and putting the big station in here. It can be "parked" at the station with the freight going out and around it. Very exciting. I hope it works!!!  heheheh 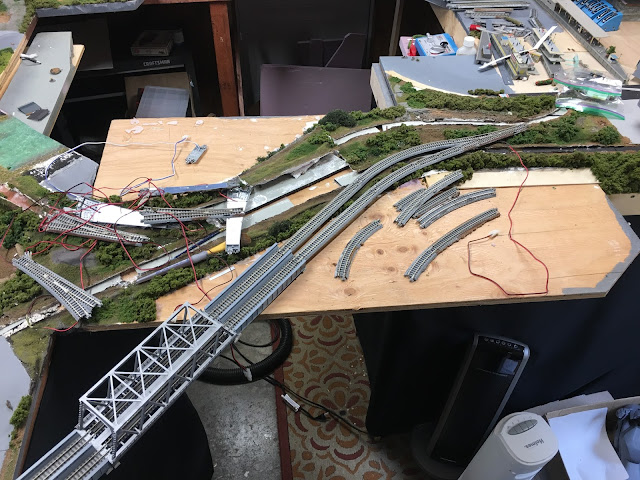 Posted by malcoJOJO at 6:13 PM No comments: 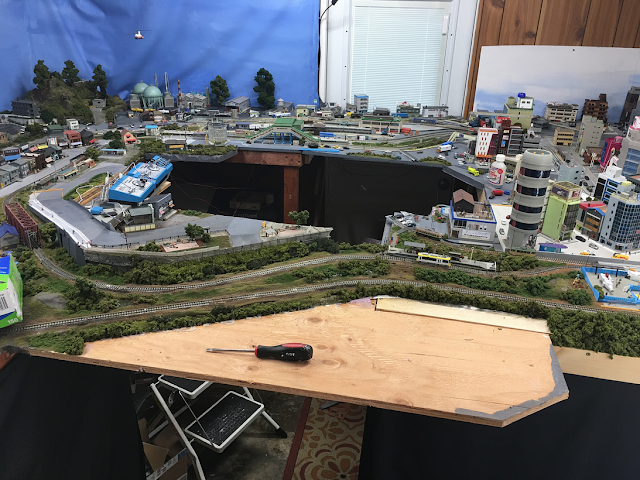 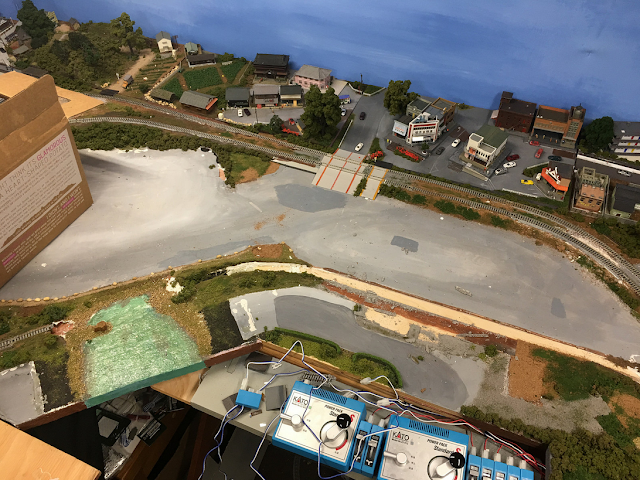 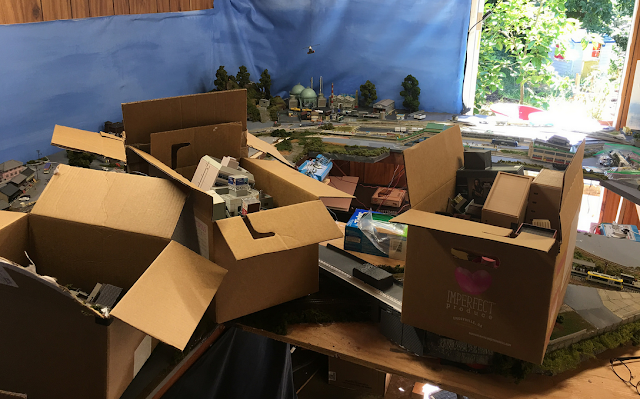 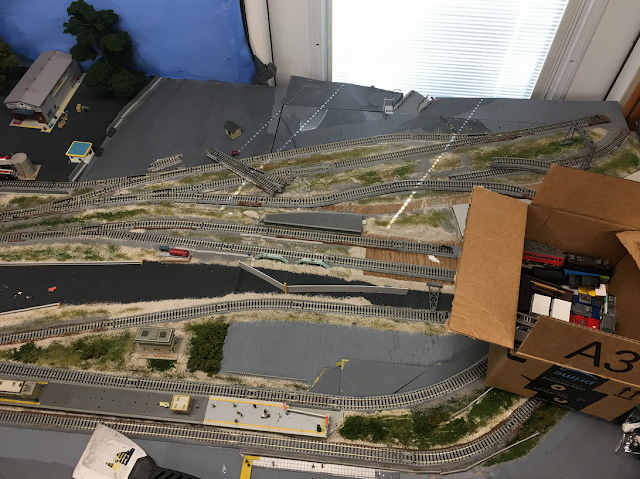 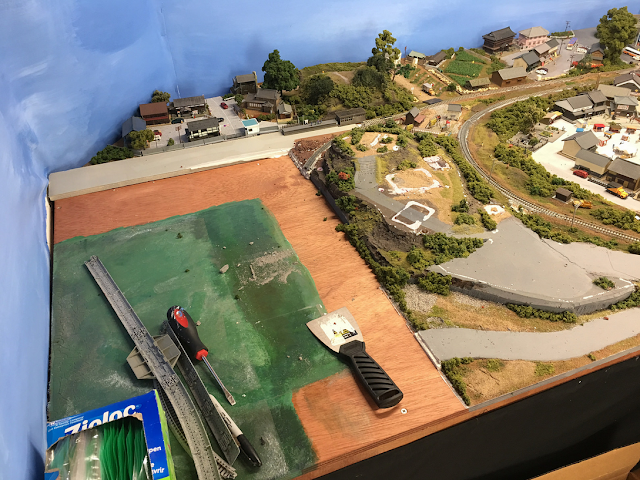 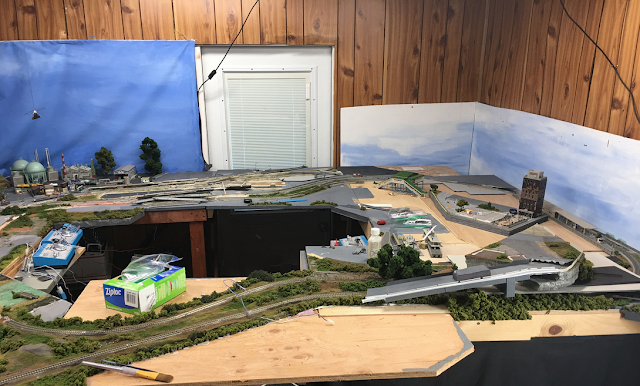 Posted by malcoJOJO at 3:34 PM No comments:

Farwell to an era

I poured a glass of whiskey, topped it off after a few sips, then.....dove in. It has begun. 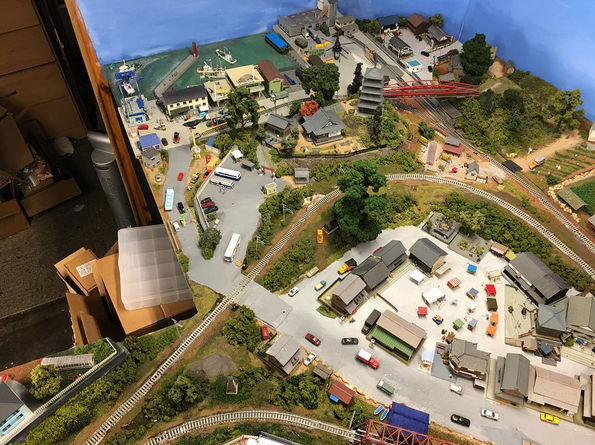 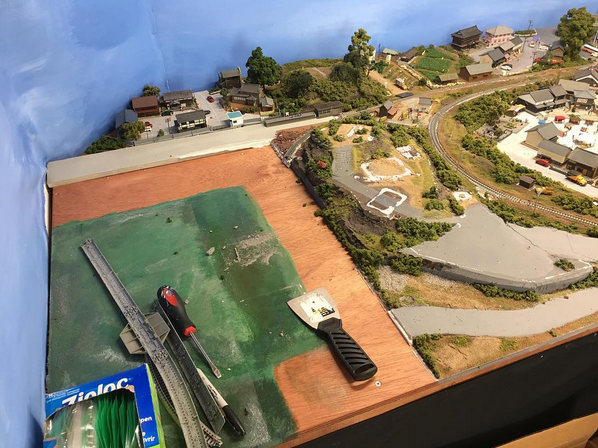 Posted by malcoJOJO at 1:55 PM No comments:

Soooooo...I'm re-thinking my re-thinking. I'm just not sure I want to tear EVERYTHING up and out. Packing up the buildings, packing up all the autos, trucks, and people......

So, now I'm thinking things through and seeing if there is another fix that doesn't require everything being ripped out. I still have the feeling that I'll have to rip everything out if I want some of my changes to go into effect, but maybe letting things go is the way to go.

Any comments or suggestions are welcome!
Posted by malcoJOJO at 5:56 PM No comments: