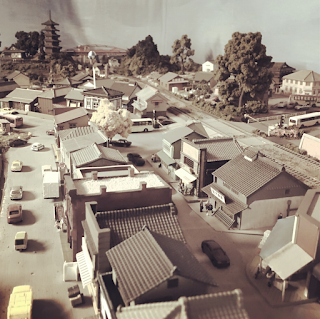 I did another little update video to talk through progress and it's one of those, "Hmm....I actually got a good amount of items going here," moments. It's funny what you can get snuck in doing a few minutes here and there. That idea about getting some time in every day even if it's just 10 or 15 minutes seems to be paying off. Little things like track cleaning can be done when I'm work calls, as well. There's really not a lot of thinking that needs to be done when you're cleaning track. It helps me focus on my calls. 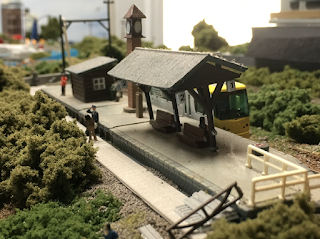 It's also interesting to see close up shots of the layout. You can see how much dust and spider web accumulation there is. I looked at these photos and said, "Wow...I really need to start doing some dusting." :)

This station was moved down from the upstairs Soyokaze River shelf layout - that thing was a dust magnet up in a guest room with sheets and blankets being used a lot. Interesting.


The little iPhone update below. 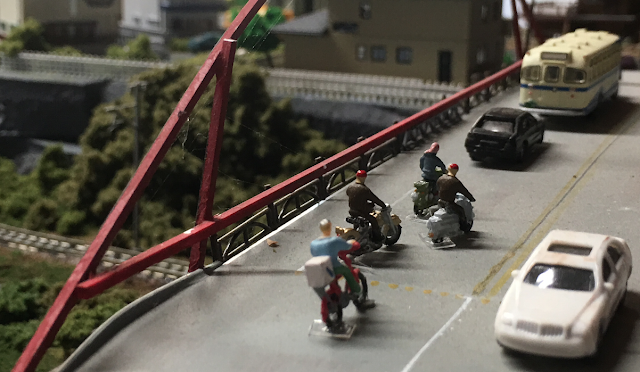 Posted by malcoJOJO at 4:35 PM No comments: 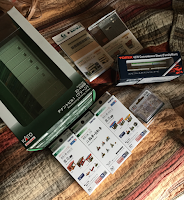 I've been playing around with blog posts titles. "The Crushing Weight of N Scale Time Management" is an attempt at being a little more interesting with my titles. :)

I still snag items from HOBBY SEARCH. I grabbed a lot this round due to a recent freelance project I took on. The perk - adding to my monthly allowance for hobby supplies!

I've been adding to the population of the layout slowly but surely. I add a few people here and there and it's slowly getting up to fun levels in certain sections.

Recently, it was the little shopping spot in Soyokaze. I added some additional stalls and some more shoppers. I plan on adding much more here in the future. I want it to be fairly crowded. 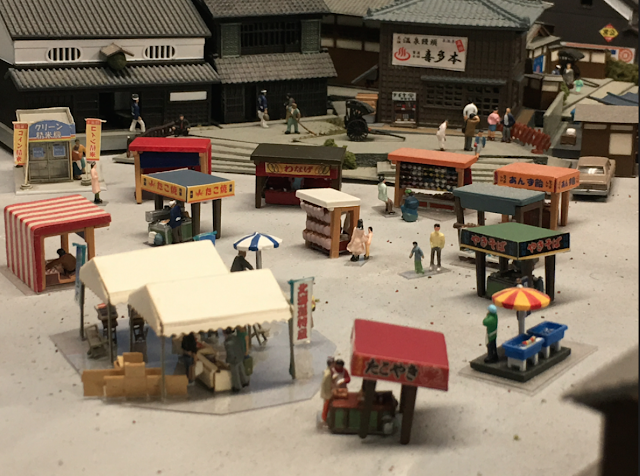 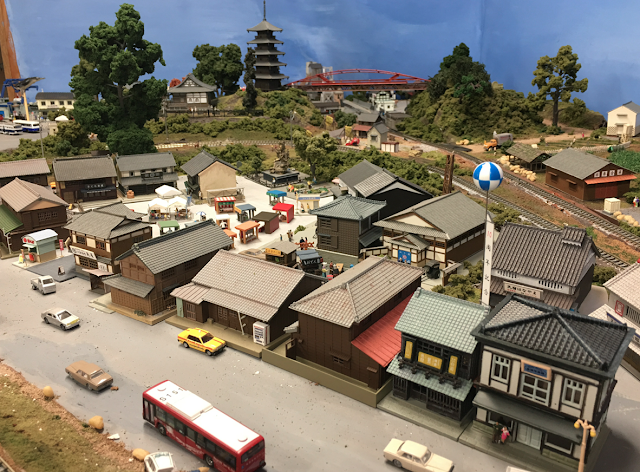 I also added some farmer folks to the back scene. Mostly more resting folks at the moment. Taking a little break from work to chat and enjoy the breeze.


Folks are still wandering around the Soyokaze Temple as well. 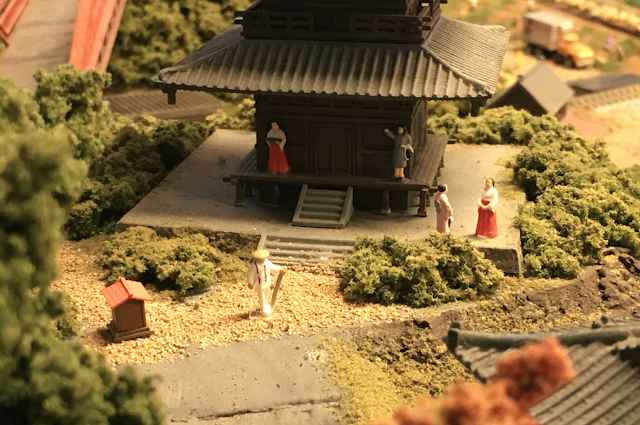 I picked up a small market. I still need to weather it, however. It's going to see a LOT of business - it's right by the factory and I'm sure they'll make several runs a day to pick up sodas and food. :) 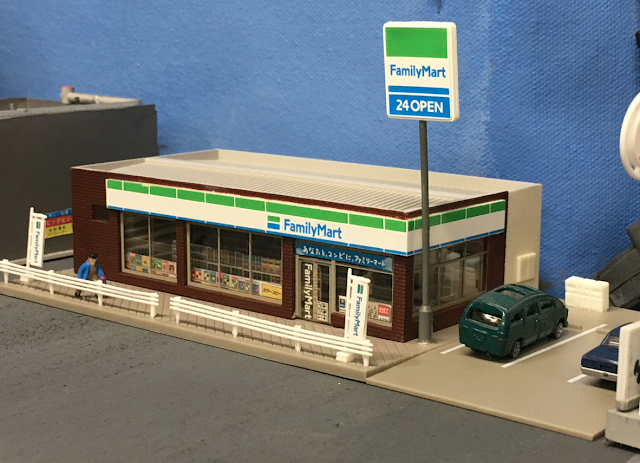 I moved the little medical building over to the other end of the layout as well. 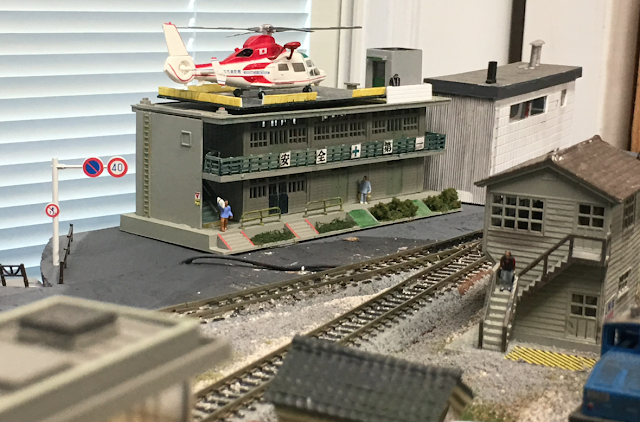 I was out with my daughters and past these signs at a sushi place. I snapped some photos and will be sizing and printing them so they can appear on my layout in the near future! I like the look. I may have to go back when there is less glare on the window, though it will work well if it's supposed to look like it's behind glass. 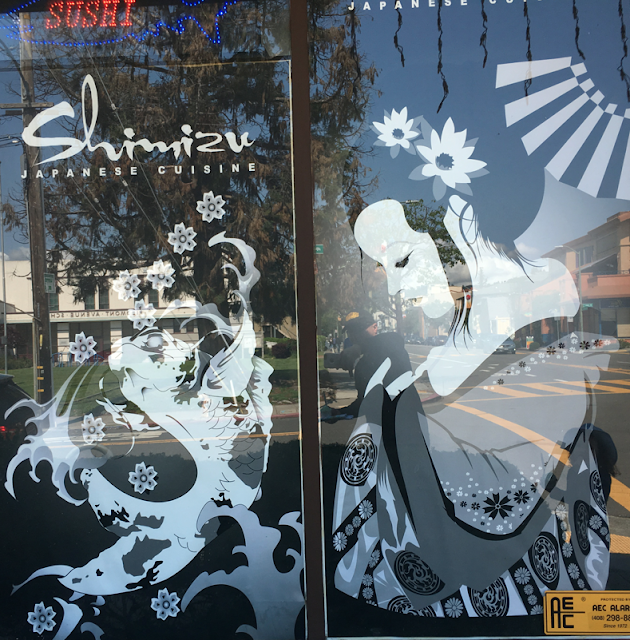 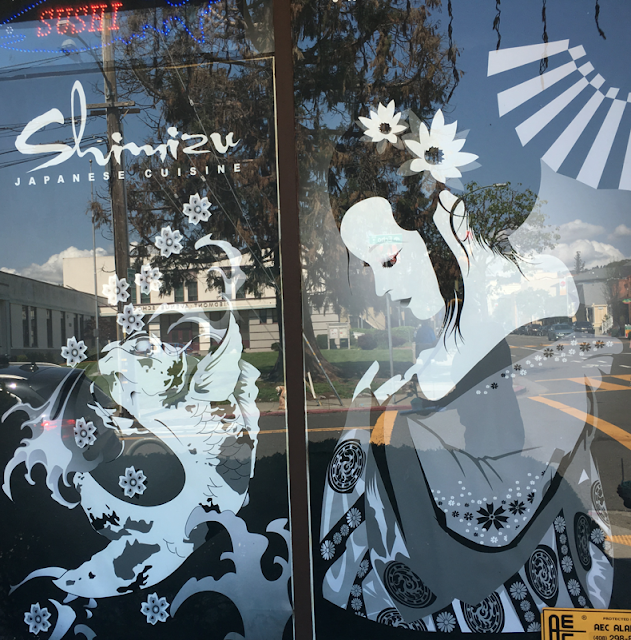 This one was on the other side of the shop. It had far less glare, so maybe going back in the morning to shoot the other side when the sun is in a different spot would make since. We'll see. Another fun design.

As of the date of this post, I have not made plans to change up the track arrangements. I'm leaving things as is, but will have to address the one section of track - the switch, really - over by the harbor area that's causing derailments. Not sure what's going on there.

I'm still enjoying running trains around from time to time. I'm trying to clean the track more often so that I'm able to run freely without worrying about the track being clean or not. A nice way to relax during the day and post work day to relieve the stress. 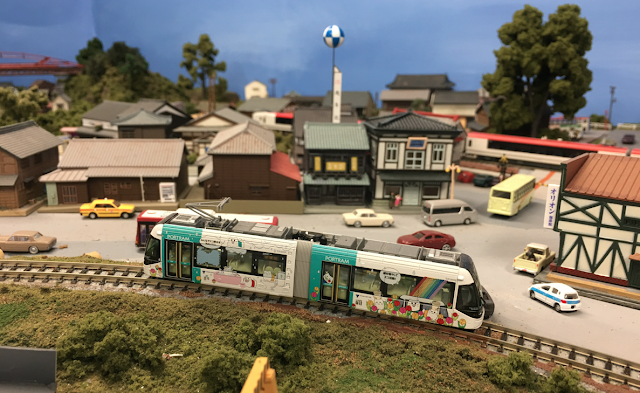 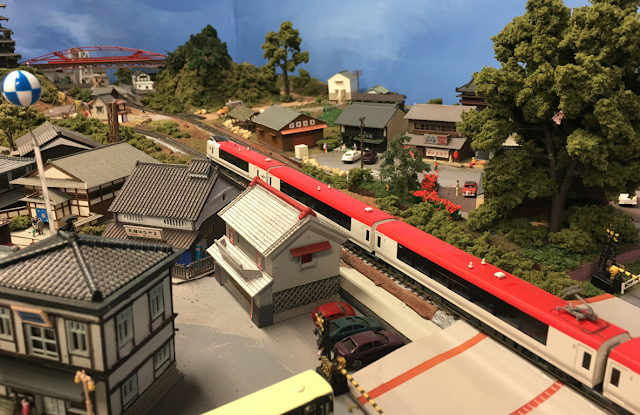 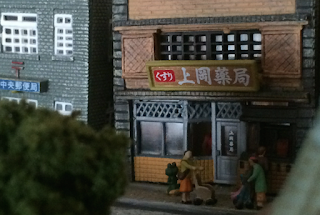 I said goodbye to my Soyokaze River Module recently.  I had looked at it and I saw that it was dusty, covered with webs, and forgotten. It was time to look at folding it into the main layout. 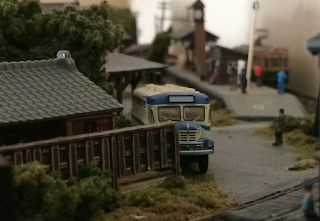 However, I got sad seeing it up in our guest room - alone. Dusty. 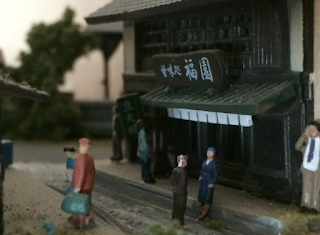 I had an idea - re-build a back module of my layout and fold the buildings from the river module into the rebuild. It wouldn't be the same, but I might have been able to retain some of the flavor of the Soyokaze River shelf.

I talked to my wife about the project and she mentioned the fact that she really liked the module I was thinking about rebuilding. She liked the mountain and the nature presented. Then she said, "Why don't you just...add the river buildings into that section?"

I looked at the section and it seemed to make sense. Just remove the industrial stuff and add in the more village looking buildings.  When I was looking at what that meant, it really became clear. It was a great flow from Soyokaze Village towards the back of the layout.

It's not as charming as the little shelf layout. That's a bit of a drag. However, I hope to get some of the more charming nature of the shelf into the main layout here and there. 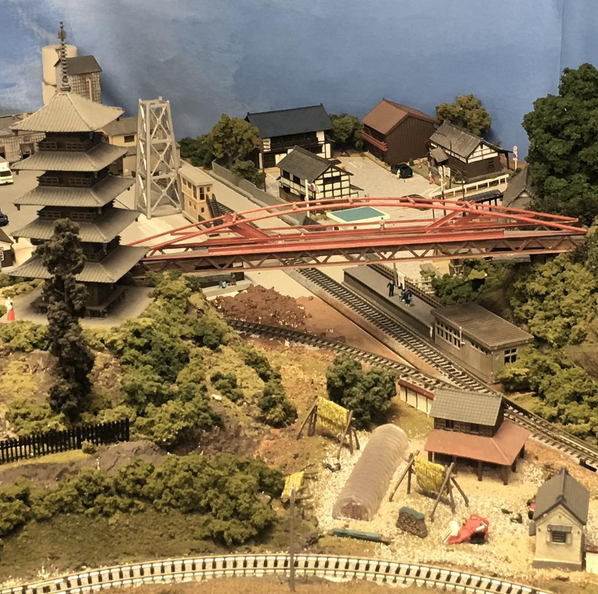 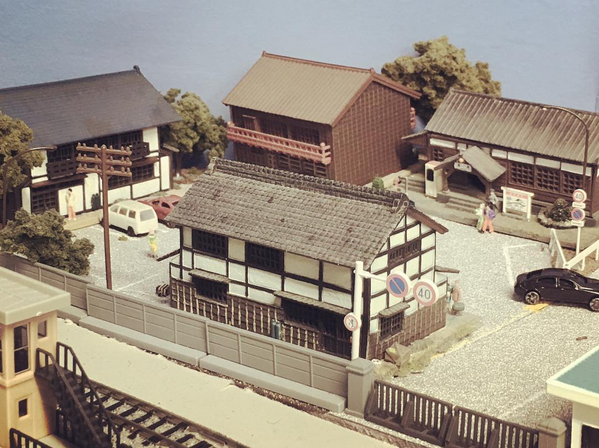